Dirt Bike Magazine – Best selling off road motorcycle magazine
We have a 2022 Honda CRF450RX that we’ve been saving for wet weather. As every Southern Californian knows, when the desert is wet it’s a wonderful place to take a big, powerful motorcycle. Basically, they don’t come any bigger and more powerful than the RX. First, we took it to the Blackmore Ranch, where Jeff Blackmore let us spin some laps on his private motocross course, then it was straight to the dez.  The RX is, of course, a bike that’s  at home both on a track and in wide-open off-road environments. It’s classified in the semi-nonsense “closed-course off-road” category. That means it’s not an EPA-approved trail bike with approved emission and noise output, but it it still has concessions to appeal to off-road guys. 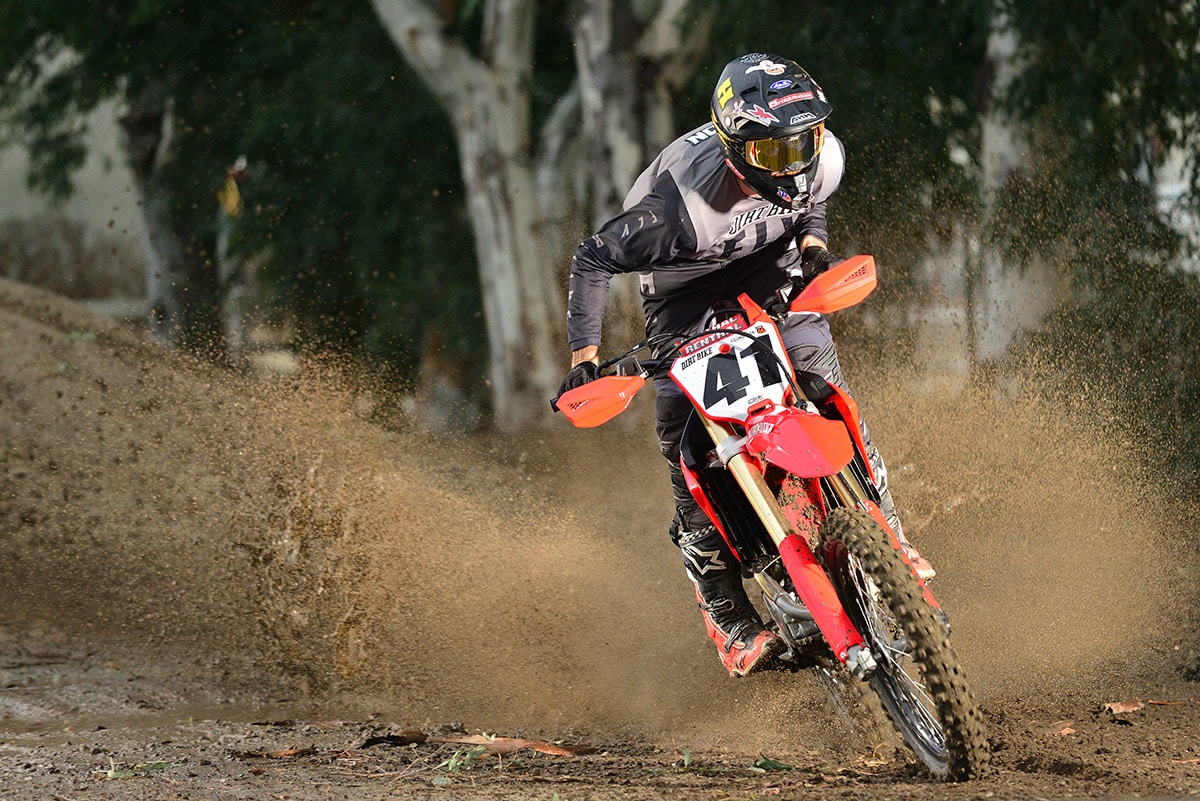 Honda started with a full-competition 2022 CRF450R motocross bike, which has a fierce reputation even in the MX world, and tweaked it with a five-point hit list:
The rest of the bike is identical to the motocross version, which was all-new in 2021. At the time, it was a little of an anticlimax. The bike was eagerly anticipated, but the Covid pandemic made it difficult for Honda to finalize suspension and mapping, so it wasn’t all it could have been. Band aids and updates followed. That was a shame, because the bike was actually ground breaking in so many ways. The frame was new, it did away with the twice pipes and was much lighter. One of the updates that translated well to off-road was the Nissin hydraulic clutch, which was something the Honda desperately needed. When the RX arrived it had different mapping and actually was a much better bike, and that’s essentially where we are right now.
Most of the differences between the R motocrosser and the RX off-road bike contribute to make it a better overall motorcycle. The softer hit is number one on the list. It’s a much easier bike to ride, but still has sooo much power. In the off-road world, it’s perfectly at home in deep sand and there’s no hill that’s too steep. Just like all of its kind in the “closed-course off-road category” you have to ride the bike with a very narrow definition of off-road. It’s not a bike for tight trails. It’s still too much motorcycle. It can stall and overheat quickly. But give it a little open space and watch out. The Honda is very stable at speed and likes to go fast. 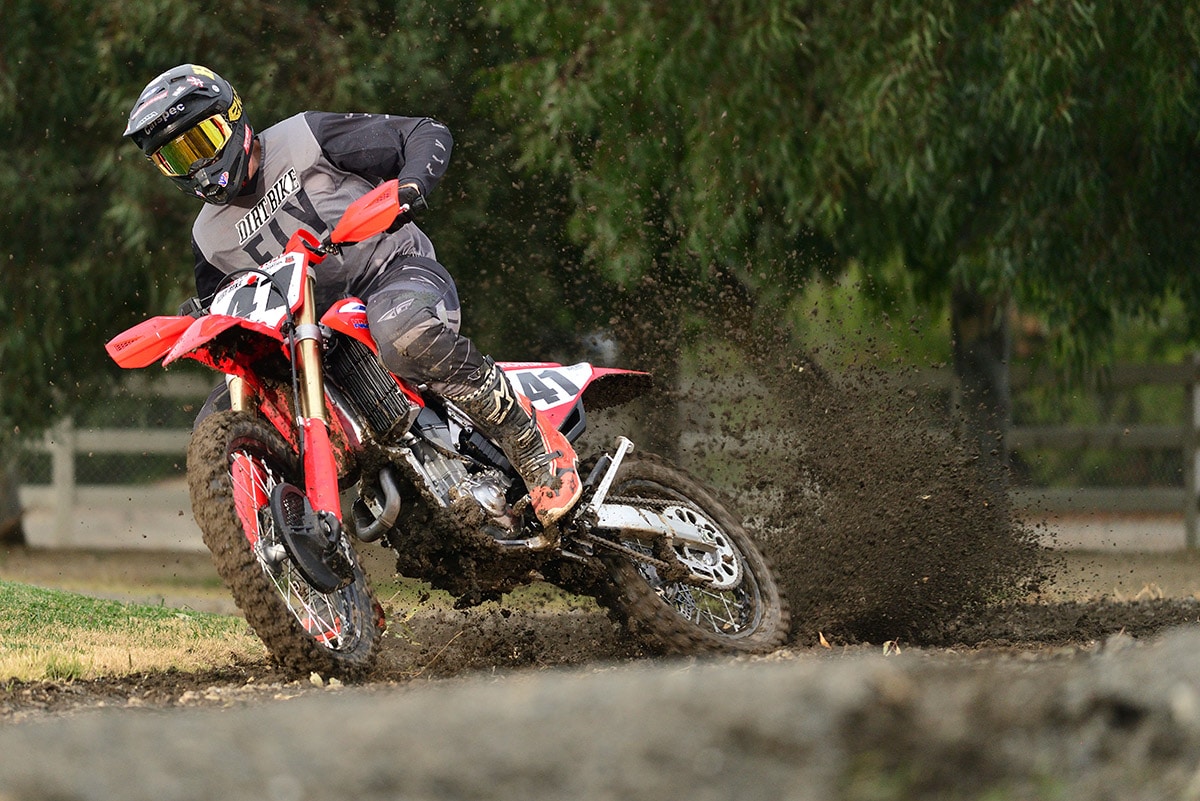 The softer suspension is welcome, too, even though we criticized the motocross bike for being too soft in the rear. Just like that bike, the RX has a tendency to squat in the rear, but that’s not necessarily a bad thing off-road. It adds an extra element of stability 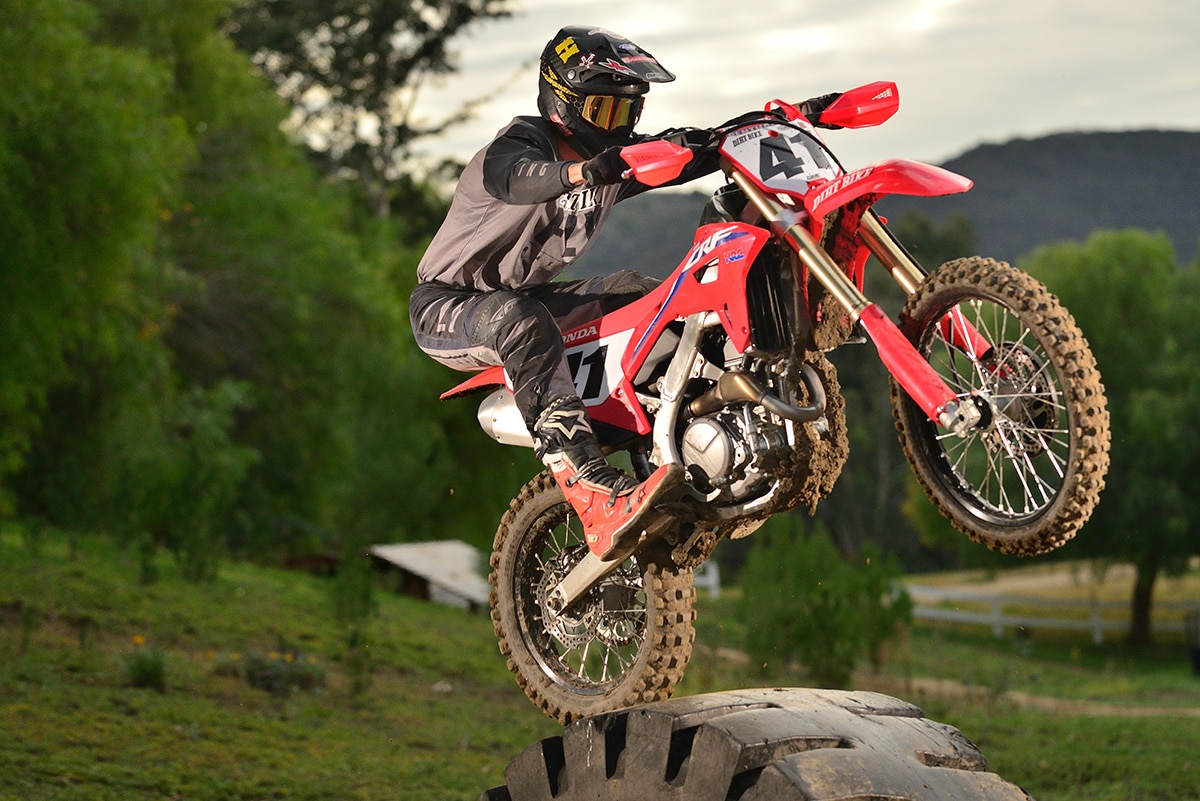 WMR Competition Performance has become the first USA dealer for the new  Stark Varg. WMR Competition is already a KTM, Husqvarna and Gas Gas dealer as well as authorized WP Suspension service center. WMR’s location in South Central Florida puts them in a perfect location to serve the entire US with an onsite, fully stocked MX race shop, WMR can build and ship your bike, gear and spare parts right to your door anywhere in the country. As the largest Alta Electric bike dealer when they were in business, WMR was one of the pioneers in electric motorcycles. You can visit the WMR website here.
The 2022 Dakar Rally will start on January 1 in Ha’il, Saudi Arabia, and, after 12 stages and a rest day, will end in Jeddah on January 14. The Dakar 2022 will also be the first round of the new Cross-Country Rallies World Championship. 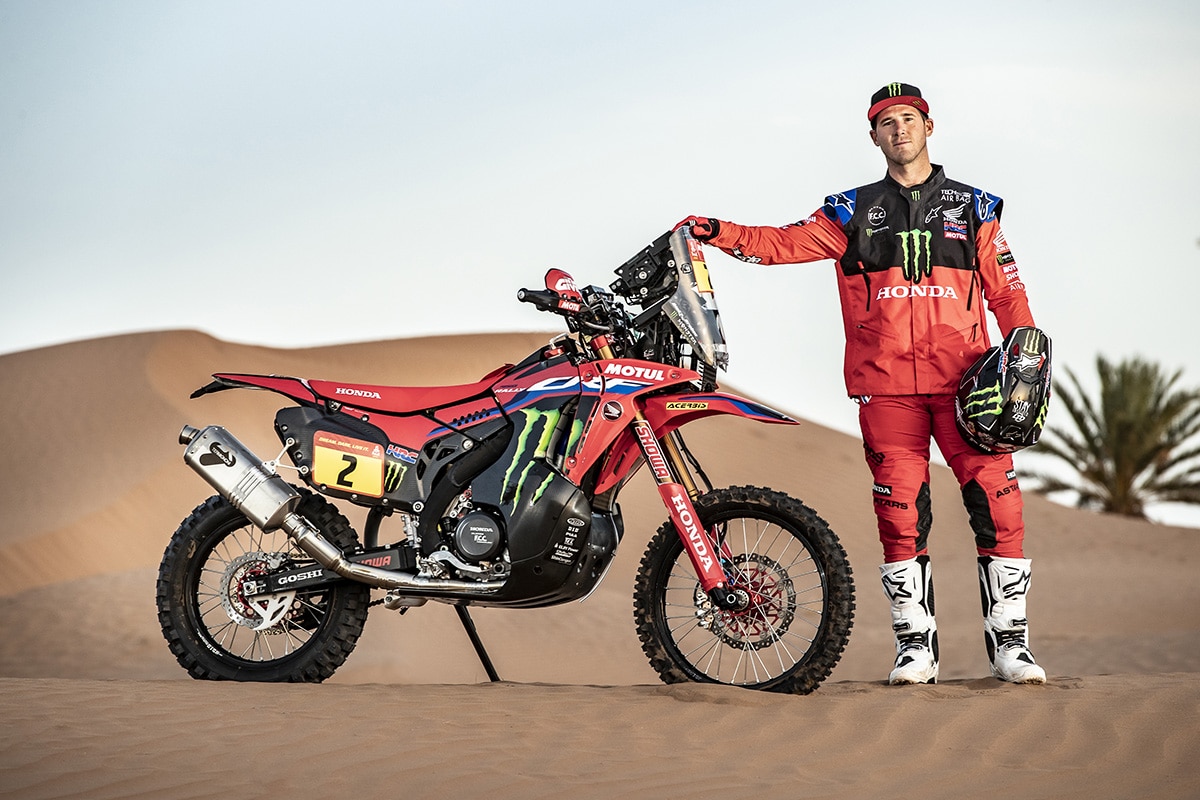 Ricky Brabec, American, champion in 2020 and runner-up in 2021, will adorn the #2 plate on his Honda CRF450 Rally. José Ignacio ‘Nacho’ Cornejo, the young 27-year-old Chilean promise will also ride for the Monster Energy HRC Honda team with Joan Barreda, who currently is the active rider with the highest number of stage wins in the motorcycle category. Pablo Quintanilla is the latest addition to the Monster Energy Honda Team. 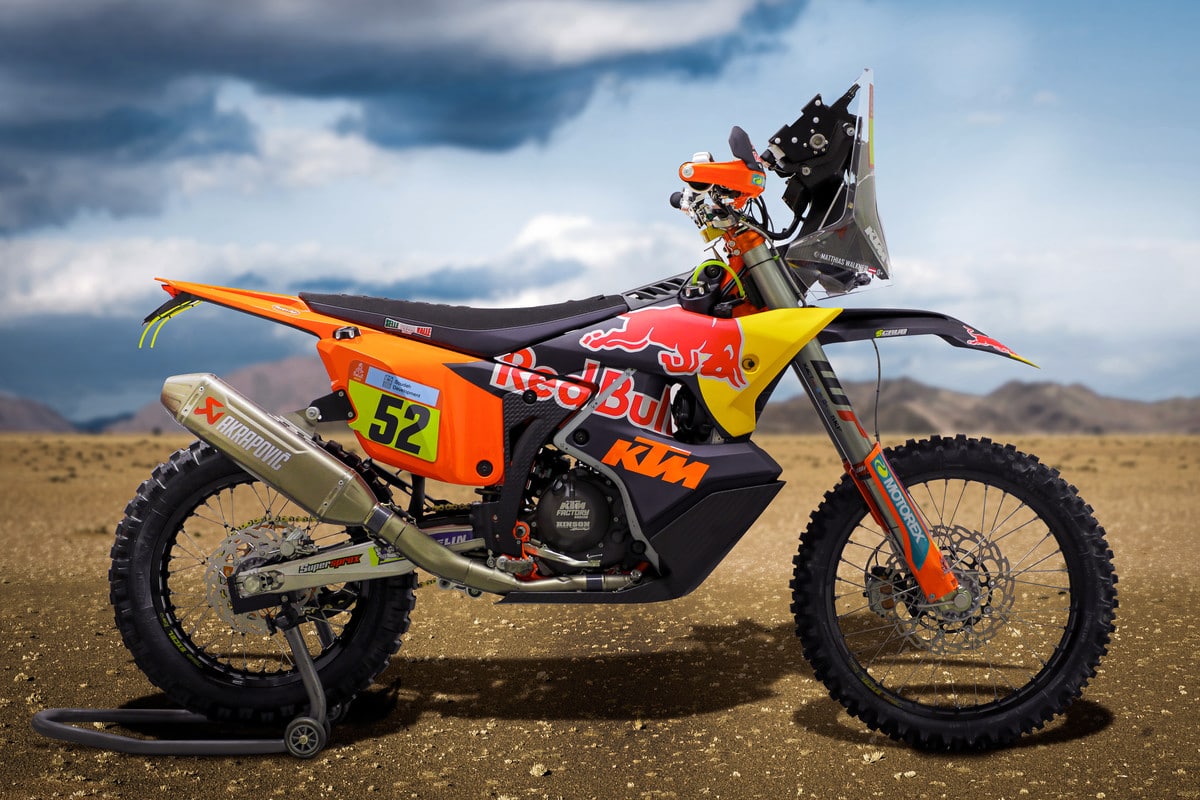 Matthias Walkner, Toby Price and Kevin Benavides will ride for the Red Bull KTM team. Benevides was the 2021 winner riding a Honda. The KTM is a new bike this year, reflecting some of the same changes as the recently announced 2022 450SXF Factory Edition. 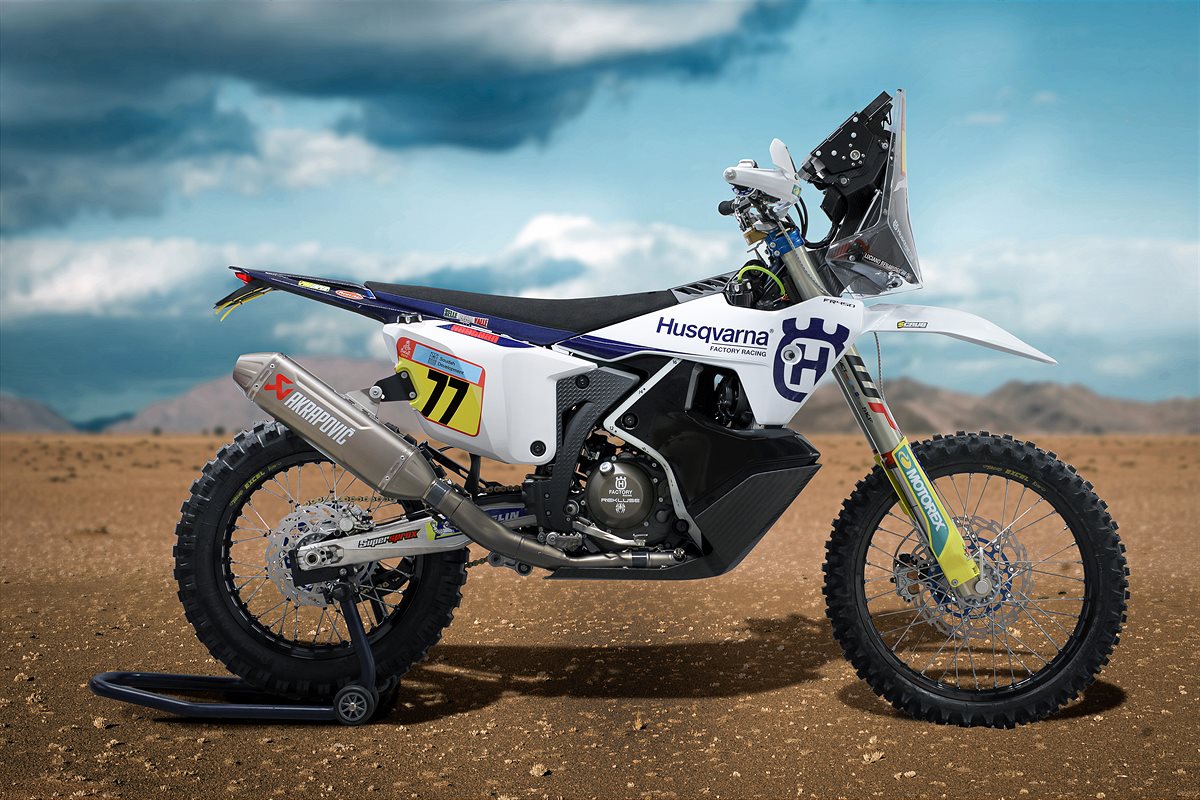 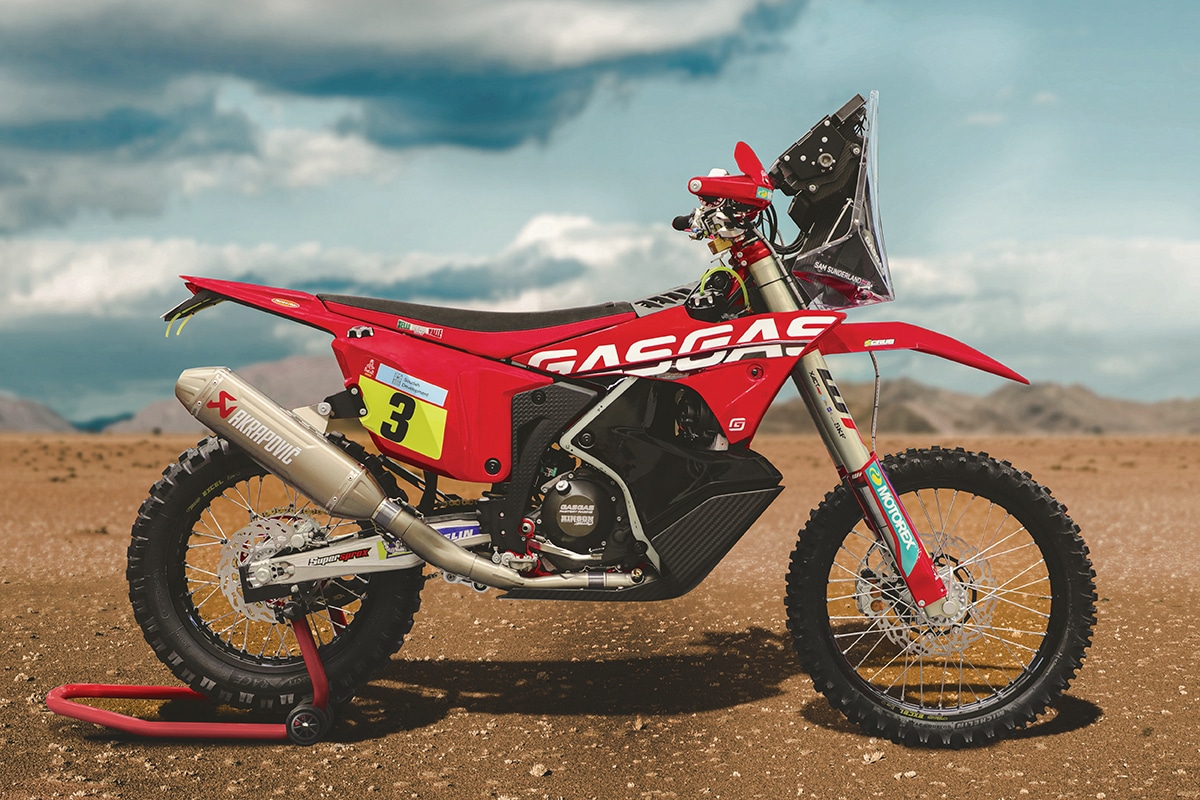 Sam Sunderland will join Daniel Sanders under the GASGAS Factory Racing awning in 2022. The bike, as you might expect, bears a resemblance to the Husky and KTM factory efforts. 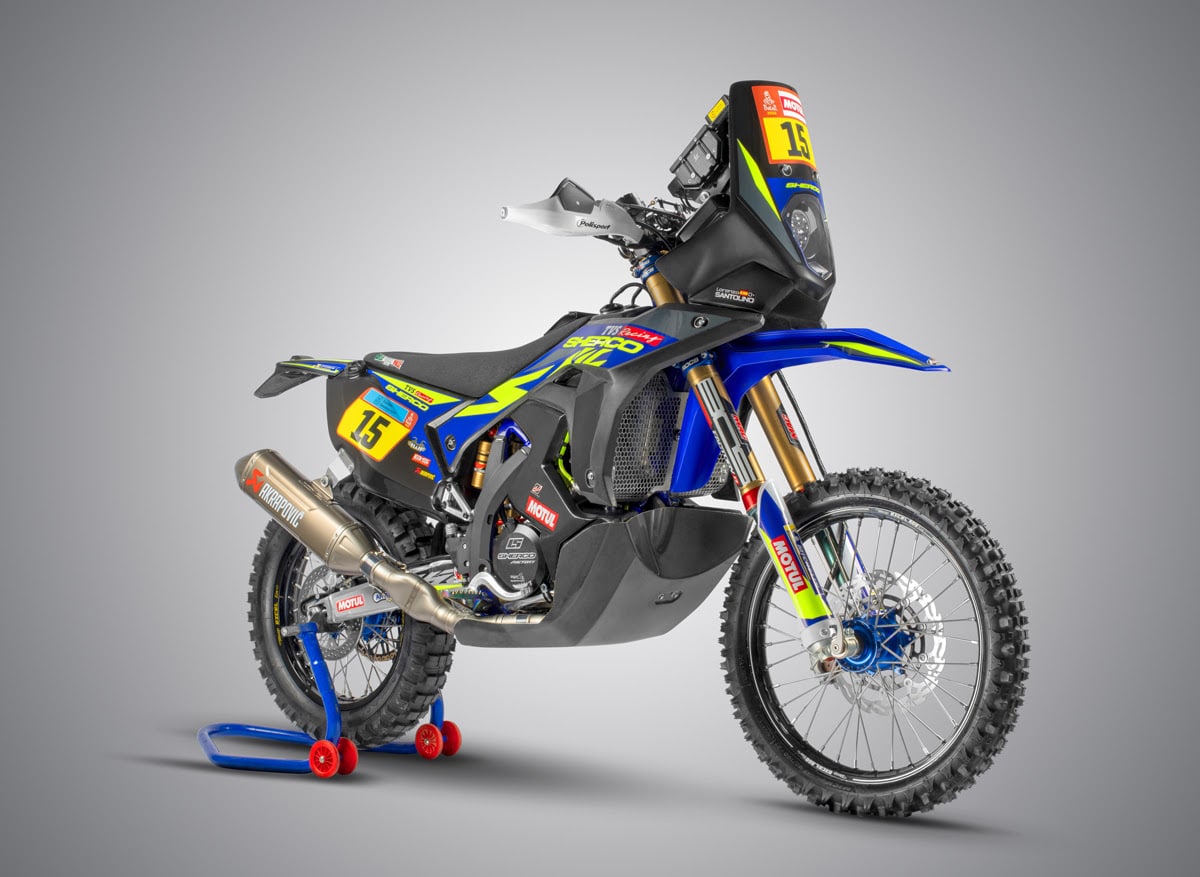 The TVS Sherco team will have a bike based on the 450 SEF Factory. Lorenzo Santolino, who finished sixth last year’s Dakar, and Rui Goncalves will represent the French motorcycle maker with Indian TVS as the title sponsor. Jan 1. 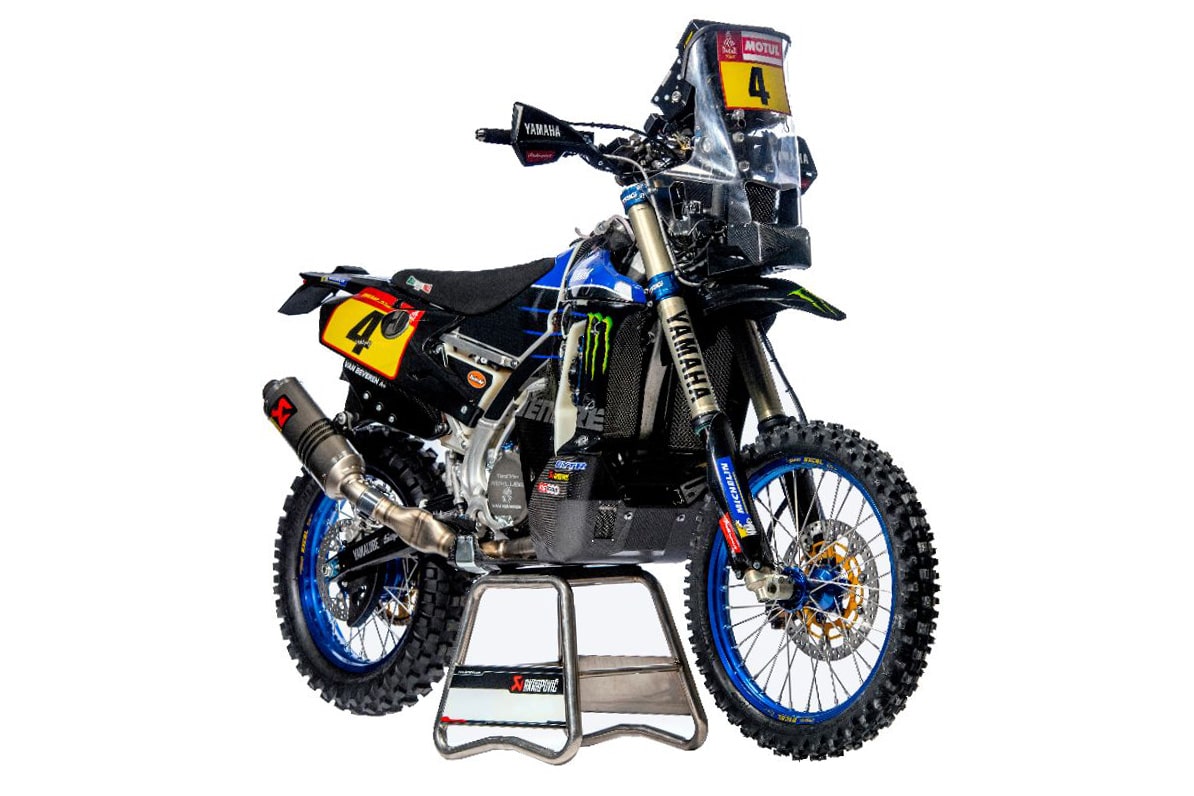